The portrait of Pong designer Nolan Bushnell was always going to be done in a different direction. My initial ideas had him literally part of the game as the floating brick, possibly in 3D. In the end though, it was cooler to go with a "man in the machine" looking back at you. As the other prints became busier and more detailed, I added the Pong arcade cabinet around the border. The point being played for would end up making the score 2/5 (Bushnell's birthdate). 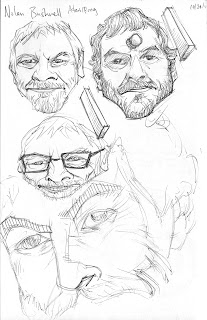 The final print (I have one left for sale at my online store): 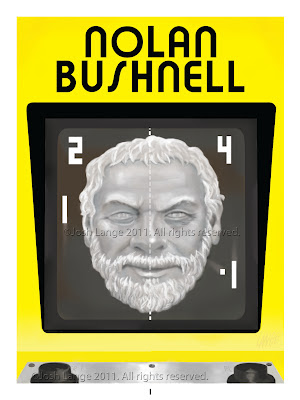 Josh Lange
CA, United States
I am a Previs/Postvis Artist, 3D Animator, and Visual Artist. Credits include X-Men: Days of Future Past, Godzilla, Marvel's The Avengers and 2010's Game of the Year: Red Dead Redemption. This site is the blog counterpart to JoshLange.com, my online portfolio of art and animation.

This is not an official blog of Proof, inc, The Third Floor, Inc. or Rockstar Games. The views expressed on this site and on JoshLange.com are mine alone and not those of my employers.